OK, I will admit it. I am not a big cordless kind of guy. I like my 4 amp corded drill, that I use more as a screw driver than anything else. I like power, I want the “Binford 2000” kind of power. I have two Black and Decker drills. I have done major projects involving putting in lots of screws with both of them. My older one, now 20 years old, was initiated with fastening sheet metal skirting around the mobile home I lived in at the time. I put in 150 screws in less than an hour. My current one has done four decks, a room of dry wall, two exterior door installations, and many other general projects. I taped the 15 foot extension cord to it so I always have it handy. 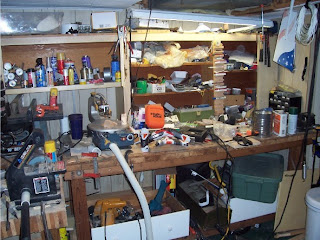 I admit that Norm Abrams and I have about as much in common as ducks and hydrogen. He is able to create a replica bonnet-topped Queen Anne-legged tiger maple highboy, in 30 minutes, and I can barely put together a bookshelf, if it uses 2x4s and 1x10s. Heck, I can’t even get miters to come out right most of the time. I am not a high end cabinet maker by any means.
But Norm has that multigazilion dollar workshop and plenty of assistants. Norm has this, and I have that. I would love to see Norm build that highboy in my shop. I don’t have the spindle sander, band saw, planer, bar clamps, router table, or even a router for that matter.

I suppose I am more like Tim the-tool-man Taylor, except I am unlikely to rig my dishwasher with a Harley engine. I do put together Sauder furniture with fair regularity, in fact, I have 4 bookshelves, a computer desk, and an entertainment center all by them. For the most part, I find them relatively easy to complete.

I do use tools though, and I do like to build things. I own more saws than the average guy, and only use three of them with any regularity. I love my 1 inch table top belt sander, and it wasn’t until I started using a drill press did I realize that I could in fact drill a non crooked hole. I am either building big things for my yard, or small wood animals.

I believe in a place for everything and everything on top of the workbench. Chances are the last thing I used will be the next thing I need, so it should be right where I need it – on top. My tool bucket is probably the most organized thing I have. My drill sits right on top where I can get it easy, and most of the hand tools I use are with in reach when I need them.

When I got the new Black and Decker VPX cordless screw driver and saw, I was a little ambivalent that it would be useful to me. Remember I like power. This set is a light weight set. It is not a heavy duty set that would stand up to deck building or drywall installations.

However, I am a convert. I have been using it more than I expected. There are a lot more little things I do with a screw driver than I realized. I like the quick change chuck, and paired with my Black and Decker bit set, works well for light duty drilling.

My first project with the set was to build two small shelves for our new hamster cages. This was not a huge project, but it came at the same time as the new tools. I need to raise one up to connect the two together with the typical hamster tubes. I used the saw to cut a 2x4, and the screwdriver to put it all together. While this is a small project, it worked out pretty well.

I am sure I will use the saw much more outside doing things like trimming bushes, and small branches. Other then the small project I have not used it much. But since the blade on it is sharp, it worked great on the one project I did do with it. I like that it has a quick release on the blade to make changing easier. On my other similar saws, I have to use either a screw driver or an allen wrench.

I think the screw driver will become an upstairs tool, where I can get to it easily, along with the flash light. Again, the tools are nice, light duty tools, and surprisingly good. Coming from a guy that doesn’t normally like cordless tools, that’s great.

A couple small design notes. I would like the battery to be shaped in such a way that there is only one way to put it into the tool. As it is, I slide it in, and then realize I have it in backwards. It just doesn’t snap in then. Also, I wish the flashlight had a more ergonomic grip to make it easier to find the power button. I should not have to look at the flashlight (in the dark mind you) to figure out how to turn it on. Otherwise, the tools are very well done.

These tools will become part of my regular tool kit now. Not just for special occasions.
Posted by Jim r at 6:26 PM No comments: